As I mentioned, Wednesday was printmaking at College. Monoprints, lino cuts, eraser carving, and Pressprint [the expensive version of that polystyrene you get under pizzas].

We did monoprinting in the morning, after a show and tell from the tutor, Susan Chapman, which included this – Judges’ Choice at this years FOQ. 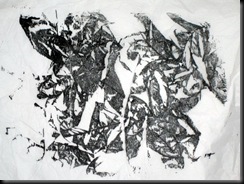 Monoprinting is beginning to grow on me – or maybe I’m just beginning to learn what you can do with it. So I'm quite pleased with this – print plate dabbed with a scrumpled plastic bag - 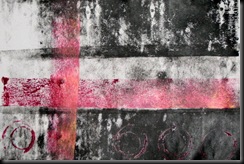 and this – which strictly speaking is a roller print – apart from the circles, which were the top and bottom of a little plastic container which came with my iron - 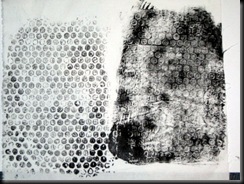 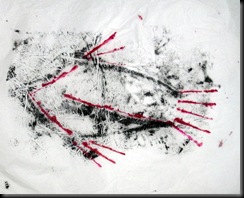 But best of all I like this  -printed with the scrumpled plastic bag, with some added credit card printing. I didn’t intend to print a fish - not sure if it’s a cave painting or a fossil. 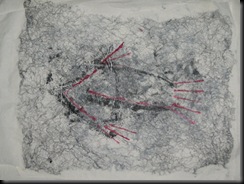 I glued it to some monoprinted fabric with black misty fuse which made it more stone like – it’s printed on tissue paper so is semi-translucent.

Now I need to decide how to embroider it.

In the afternoon we made printing blocks. My dislike of linocutting was confirmed – I don’t dislike the end result [in other people’s hands] – I just don’t have the patience for the process. I can’t show the result as Picasa seems to have eaten my photo, and I’m too lazy to get up and take

I much prefer Softcut and the other lino substitutes. This was inspired by one of the pieces at the Peter Eugene Ball exhibition we went to at Salisbury Cathedral.

This version is on a suitably coloured Colour Catcher – I need to think about stitch for this one too.

I didn’t initially like the  Pressprint piece – but overprinting improved it a bit. However Picasa seems to have eaten that image as well. 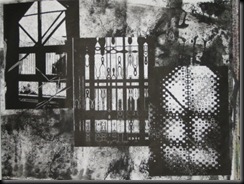 Fortunately the CT images are still there. These are Picnik manipulated versions of the picture of the window on the left. I love the shapes in the middle one.

I like your hand carved stamp.
I have enjoyed reading your sketch book/ textile journal entries. It is nice that you have let us come along on your creative journey.