Blame it on insomnia…

You would think after a weekend of child care I would have slept like a log last night – but not a bit of it.

So the over-abundance of manipulated pictures of a passion flower now residing on my computer is the product of those hours in the chilly fastnesses of the night. [Short pause while I Google that phrase and don’t find it – I thought it was a quote but maybe it’s just a family saying.]

I am NOT a computer manipulation guru – just an embroiderer who can’t draw, I’m not much of a techie either which is why I like simple picture editing programs. [I will learn Paint Shop Pro one day. I will. I will.]

I always use my own photos – this avoids copyright problems and they are more personal and meaningful anyway. Even a photo of a plank.

What I discovered last night was just how many free programs there are out there. I think I still like Picnik the best – but I did find one or two others that I will use again.

So to prevent this series stretching into infinity – today you get three – er, four- er five -for the price of one.

These were all done with Picasa, which is the [free!] program I use for basic photo fixes like straightening up slanted snaps and removing redeye – which Picasa 3 does brilliantly by the way. It also makes collages, as you may have noticed …

It has a dozen simple effects, of which my favourites are saturation, sharpen, saturation, film grain, – and did I mention saturation? 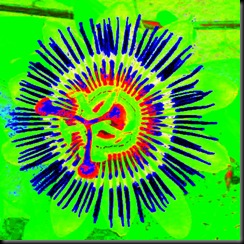 This is saturated. Three times. [You can desaturate as well but where’s the fun in that?]

Probably not one to choose if you don’t like bright colours but I think this abstracted shape would lend itself well to stitch. 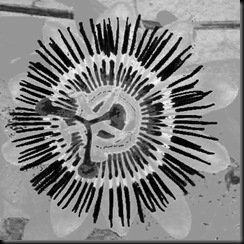 A quick extra – the green one in B&W – just a little more subtle. 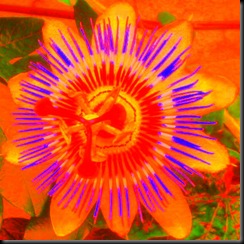 For  this one I used the warmify and glow effects – oh, and a touch of saturation.

Perhaps not such an obvious candidate for stitch but some interesting colours, outside my usual colour choices. 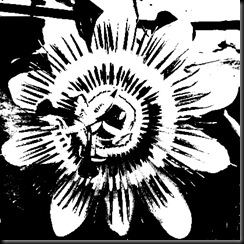 And for something a bit more restrained – I used the the black and white effect and then, from the Tuning menu, I added highlights and shadows at the maximum setting.

Never do anything  by halves. 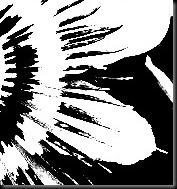 When I looked again at the B&W image just now, I decided it would be more interesting cropped – which you can also do with Picasa. Appliqué and stitch perhaps? I think there aren’t enough shades of grey to do anything  subtle with blackwork.

I hope you enjoyed that as much as I did, Just wish I had the time/could persuade myself to do something with them – the muse has departed again, although I am getting a lot of knitting done. Oh, and playing with photo editing software…

They are gorgeous Celia, especially the 2 b/w at the end.

Thanks, Celia. Your muse has NOT departed. It is merely on vacation. The info you are providing is fantastic - thank you so much. Photoshop made me lose the will to live so it has been great to discover other ways of achieving good results. Maybe you could revisit some of your C&G exercises for inspiration? They force you to start somewhere - anywhere - and follow it through. That's why I decided to start Part II: otherwise I never started anywhere because there were just too many choices. Choice is the enemy of inspiration sometimes. Karen