to be able to show you another new book today – well, pride goeth before a fall. Despite doing the binding twice, it is all a bit of a mess. I have left it and will go back and look at it again tomorrow. The trouble is that rebinding it would necessitate a lot of unglueing, and glueing is not usually reversible. Just shows I should stick to stitch. [No pun intended, it just came out that way…]

Mmm – Live Writer doesn’t like ‘glueing’, it wants to substitute ‘gluing’ which looks odd to me. And Wikipedia tells me the former is an obsolete form of the latter. My dictionary has both. Am I obsolescent or is this a US/UK spelling thing?

But I digress. Having run out of themes for the photo effects, I thought I would write about the various programs I’ve found in turn – from the point of view of a computer ignoramus. With illustrations.

This will all be textile oriented of course - if you are into scrap-booking, or making funny photographs of your friends/enemies, there is a lot of stuff out there but you’ll have to find it for yourself.

I’ll start with what I think is the simplest program I’ve found. [Simple in terms of what it does, you understand, not how it does it, which I don’t understand and don’t want to understand, thank you very much. I leave that to Cheese Major.]

OK – No 1 is Kaleidomaker, which I mentioned yesterday. As I said, you have to use an image from the Internet – like your own blog, which is how I did it. I’m sure there are other ways, but don’t ask me what they are …

There are three options for the number of reflections in the image, and you can move the original image around to vary the result. The ‘Feed’ button makes a kaleidoscope from the first kaleidoscope [I think!]. You can save your image if you make one you like.

Not all original images make good ‘scopes – I suspect that a big image with lots of contrast and strong colours will work best.

It’s fun but I think it is probably of limited value for embroiderers without further manipulation because the image is quite complex. [Unless you have a lot more patience than I have …] 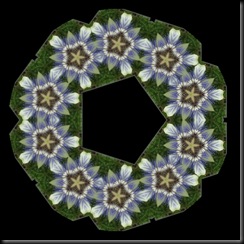 So I turned to Picasa – but no saturation this time. I started with this [a ‘scope of a ‘scope] 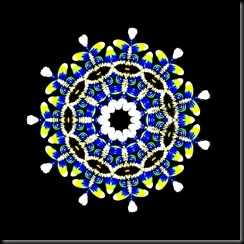 and maximised the shadows and highlights to get this. 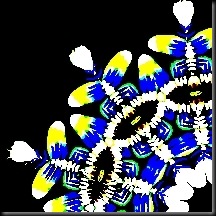 And then cropped it.

It doesn’t really grab me but I think there are some possible motifs for stitch there.

If you think there is potential in the program that I’m missing, I’d love to know. If you have tried some of these programs for yourself, I’d love to see the results.

Flowers clearly work well with some of these filters – but have you tried other things? What works and what doesn’t? I’ve persisted in using the same image as I think it makes for better comparisons [controlled experiment, to get psychological] but I’m not really a flowery person – I just liked my original photo!