of son of plank. I think. This is the ‘Hex Cells’ filter on Picnik.

My first ever attempt at patchwork was hexagons over papers with blue and white Laura Ashley fabrics – after which I gave up patchwork for about 10 years. The barely started piece languished for several of those years until we moved and I junked it.

Which is a long-winded way of saying that this looks like patchwork but you won’t catch me tackling hexagons again – even purple ones. 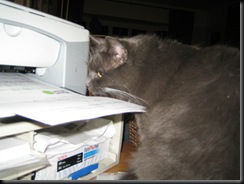 QC, I have to report, is not a well cat. She has harvest mites – hence lots of nasty weals. She looks scruffy but  isn’t scratching and seems OK. She is more upset because we moved the printer and she doesn’t like lying on it in its new position. 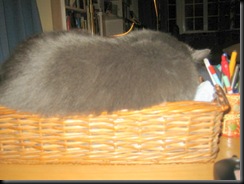 So she has decided to sleep in my in-tray.   OK, so it is a basket – but I bet if we’d bought her a basket she would have ignored it.

I have managed to complete the plastic bag book – helped by waking up at 5.30. [My camera battery is flat so I have only managed a couple of not very go 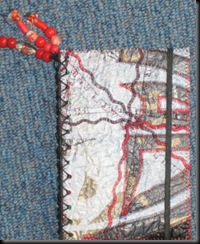 This is another design from ‘Re:bound’. The original used Victorian photos for the covers but I don’t have any suitable photos - and that look isn’t to my taste anyway.

What I do have is plastic bags.

So as I mentioned a day or two ago, I chopped up some bags with rather funky print and images and ironed them together. [The funky bags were acquired from Cheese Minor -  I haven’t started dressing as lamb.]  Then I machine embroidered all over the result and backed it with card. Much more my sort of look. I.e. messy. 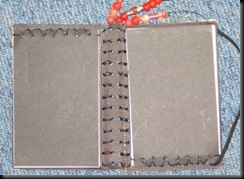 This is the inside. Those are two notebooks - the instructions are to insert them in opposite directions – not sure why – so I did. These are the covers – the pages are white, so it is usable!

The original was sewn and tied with ribbon but I used  waxed linen thread, and elastic to hold it closed. And as you can see I added a few beads. Now there’s a surprise.

There is actually room for a pen in the spine so I think I may add an elastic loop or two to hold one in place.

I’m pleased with it – and may use the fused bags + card again in my continuing exploration of alternatives to Vilene.