An end and a beginning.

This is the end. 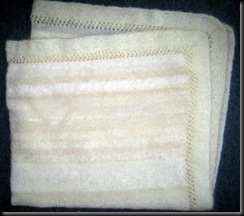 Why, you may ask, had I got so much white mohair?

There was a period when:

Eventually it dawned on me that:

So it sat in my stash until I decided to make a blanket with it. I cast on about 150 stitches – I think – with a biggish needle and knitted and knitted and knitted for months, while reading e-mails, until it was as long as I am. And then I picked up stitches all round and made a border. [Five long circular needles of approximately the same size – one for each side and one to knit with.]

The stripes are because I had different weights of yarn – I used a polyhedral die left over from Cheese Major’s role playing game days to randomise the stripes. [Well, he still plays that sort of game, but hunched over a computer rather than with tiny plastic figures. And his mother no longer has to spend hours in Games Workshop.]

And the beginning? Well, I had t 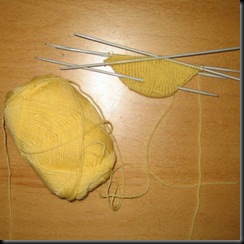 o start some more computer knitting, didn’t I? On a slightly smaller scale, although still with five needles. A toe-up sock.

No – I can’t start a sock and read e-mails at the same time, but I can do all that knitting in circles which would otherwise drive me nuts. [The wool is Jaeger three ply from – you guessed it – a charity shop.] 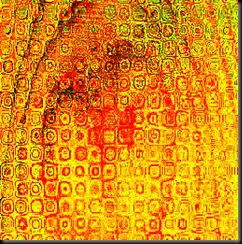 While I’m in a yellow mood, here’s the plank again, rippled in Picnik and then saturated and sharpened in Picasa. Patchwork, canvas work or raw edge appliqué?