when I said that the average number of presents per two year old on my Christmas list was 6. 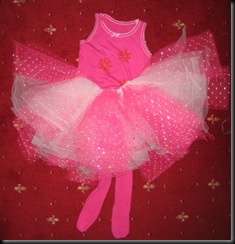 It is now 7. Although I’ve bottled out of wrapping up this one and just put into a big purple gift bag.

Pink, isn’t it? Top and tights from Sainsbury's dyed with Dylon Flamingo Pink in the washing machine, and stamped with daisies, as it’s a sort of Upsy Daisy outfit. Then  I wrestled 3 metres of net into a mock tutu.

I sort of followed the tutorial here, except that I used half the amount of net [and you can see how full it is] and rather than knotting it onto elastic I sewed channels in the folded net and threaded the elastic though.

Knotting would be much quicker.

And if Babybel’s mummy is reading this – it was your mum’s idea – I just made it!

This is a little more restrained. The image on the right is the square Kandinsky circles from the previous spread, scanned in black and white. The folded thing leaping out of the page is a photocopy painted with something – probably Koh-i-Noor – there's another one lurking under the blue monoprint on the left. And the small photo is of a sort-of-stump work C&G piece I developed from the scan. I painted Bondaweb with silver paint in rough squares, ironed it onto black velvet – and then added some couching, needle lace leaves and some raised lumps for buds. [Can you tell I’m not a fan of stumpwork?]